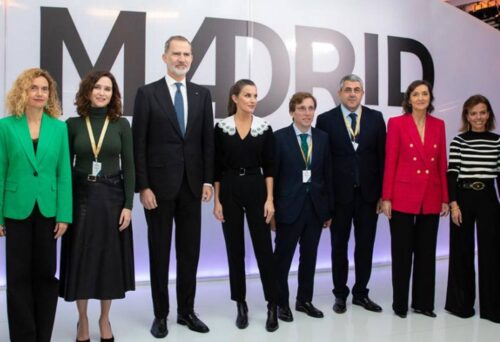 Madrid, Spain, January 21, 2023 / TRAVELINDEX / At FITUR 2023, UNWTO served as the bridge between public and private leaders to advance plans to build a more diverse, resilient and sustainable tourism sector.

With the latest UNWTO data pointing to a return to pre-pandemic arrival levels in some world regions in 2023, Secretary-General Zurab Pololikashvili once again joined His Majesty King Felipe VI of Spain in opening the major travel trade fair. Reflecting the Organization’s priorities, UNWTO placed tourism investments, rural development, diversification, sustainability and accessibility centre stage over the course of four days.

Against the backdrop of FITUR, UNWTO and the Development Bank of Latin America (CAF) strengthened their existing partnership to further advance UNWTO’s work to attract and retain investment in tourism. The partnership will include the production of tourism investment guidelines, initially focused on Barbados, Ecuador, El Salvador, Panama and Uruguay. Both organizations will develop frameworks to attract, promote and retain foreign direct investment in sustainable tourism initiatives across the Americas.

UNWTO recognized the progress made in rethinking the role of tourism in the economies and societies of the region. The President of the Republic of Guatemala, Alejandro Giammattei, and the Executive President of Banco Popular of the Dominican Republic, Christopher Paniagua, were formally recognized by UNWTO for their commitment to mainstreaming tourism in economic policy and financing, respectively. At FITUR, President Giammattei also confirmed the adherence of Guatemala to the UNWTO International Code for the Protection of Tourists.

Widening the scope of tourism

As part of UNWTO’s work to diversify the sector and enhance its status as a driver of rural development, the Spanish province of La Rioja was announced as the host of the 7th UNWTO Global Wine Tourism Conference later this year. Secretary-General Pololikashvili, the President of La Rioja, Concha Andreu, and Spain’s Minister of Tourism Reyes Maroto, highlighted the importance of the growing wine tourism sector for protecting culture and supporting local jobs and businesses.

UNWTO also recognized the importance of shopping tourism, with particular reference to its close links to leisure and gastronomy. A Memorandum of Understanding, signed by UNWTO and WOW Concept, will see the two work together to promote responsible urban tourism through joint promotions and events as well as through shared efforts to monitor and share trends in tourism consumption. Further diversifying the sector’s reach and impact, UNWTO also partnered with the Croatian National Tourist Board to announce the Second World Sports Tourism Congress. The agreement, signed  by Croatia’s Minister of Tourism and Sports Nikolina Brnjac, will see the event held in  the city of Zadar on 26 and 27 April.

To rethink accessible travel, UNWTO, Fundación ONCE and the Spanish Association for Standardization (UNE) co-organized a Seminar on Tourism for All, gathering national tourism administrations, destinations, companies and professional industry associations, underscoring the role of accessibility for social inclusion and business opportunity. The partners presented tools aimed at implementing the international standard UNE-ISO 21902 on Accessible Tourism for All, including with a new guide to applying it in accommodation and hospitality businesses.

Sustainability: On land and in oceans

UNWTO continued to step up tourism’s pace towards a more sustainable future. The Mexican State of Yucatán, home to some of the country’s top tourism destinations, is the latest addition of the UNWTO International Network of Sustainable Tourism Observatories (INSTO). Already numbering more than 30 worldwide, INSTO monitors tourism’s impact on local economies and habitats, allowing for smarter data-driven policymaking.

UNWTO concluded its week at FITUR by hosting a special meeting on Tourism for the Ocean and Climate Action at its Madrid headquarters. Counting on the participation of Member of the European Parliament Catherine Chabaut, as well as Ruben Eiras, Secretary General, Forum Oceano, Paul Holhtus, Founding President, World Ocean Council, and Josiane Sadaka, CEO of Blue Carbon LLC, the event saw UNWTO confirm its support for the BlueCOP28 and Dubai Blue Pact initiatives. For his work leading tourism towards greater sustainability, Frédéric Degret, the Founder and CEO at NOAH ReGen was named as the UNWTO Special Advisor for Oceans and Climate Emergency.

In a working meeting with Mariana Oleskiv, Chairperson of the State Agency for Tourism of Ukraine, Secretary-General Pololikashvili reaffirmed UNWTO’s firm support for Ukrainian’s citizens and noted tourism’s role for future recovery and as a pillar of peace. Meetings were also held with the Mayor of Madrid, José Luis Martínez-Almeida, Mayor of Skiathos Thodoris Tzoumas, the Israeli Ambassador to Spain, Rodica Radian-Gordon.

WTTC and Harvard on the Importance of Sustainability Leadership in Tourism