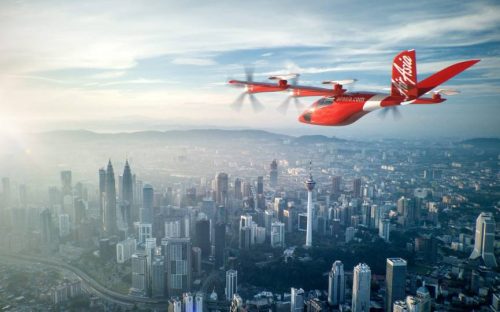 These eVTOL aircraft will allow AirAsia to further revolutionise air travel by providing advanced air mobility to a whole new range of passengers, transforming how we all connect more efficiently in our everyday lives.

In addition to the eVTOL aircraft, Avolon, through its investment and innovation affiliate Avolon-e, will partner with AirAsia to commercialise zero-emissions eVTOL aircraft and develop an industry leading urban air mobility (‘UAM’) platform in Southeast Asia. Avolon and AirAsia will form a working group to pursue local certification, research potential market opportunities and infrastructure requirements for UAM. AirAsia will also leverage its successful travel and lifestyle mobile app, the AirAsia Super App, to help support and build an eVTOL ride sharing platform with Avolon.

Avolon VX4 Order book
In June 2021, Avolon ordered 500 VX4 eVTOL aircraft from Vertical Aerospace (NYSE: EVTL) (‘Vertical’), valued at US $2 billion. Since announcing that order, Avolon placed 250 VX4 aircraft with Gol and Grupo Comporte in Brazil, up to 100 aircraft with Japan Airlines in Japan, and a minimum of 100 aircraft with AirAsia. As a result, Avolon has now placed up to 90% of its initial orderbook, underlining the demand for VX4 aircraft from the world’s leading airlines.

Dómhnal Slattery, CEO of Avolon commented: “Tony Fernandes is an aviation pioneer who has built AirAsia into one of the leading airlines in the world and has now also created Southeast Asia’s fastest growing Super App anchored on travel. We are delighted to partner with AirAsia who share our vision of revolutionising the future of air travel. We look forward to working with Tony, and the AirAsia team, on their eVTOL journey. Together we will develop a ride sharing platform and bring the zero-emissions VX4 aircraft into service, positioning AirAsia as the operator of choice for sustainable air travel in the region.”

Tony Fernandes, CEO of Capital A commented: “Innovation has always been in our DNA and using technology to look at more efficient and sustainable ways of doing things is a core focus across Capital A (formerly AirAsia Group). We are now much more than just an airline with over 20 products and services on our super app leveraging off each other including flights, hotels, food, retail, delivery, ride hailing and more. I am truly excited about this partnership between Avolon and AirAsia and the potential for zero-emissions ultra-short-haul air travel in Southeast Asia. The digital era is now. In the VX4, we have identified what we believe will be the eVTOL aircraft of choice and we are thrilled to be the launch airline for the aircraft in Southeast Asia. We are also delighted to extend our long-standing relationship with Avolon, which has a proven track record of delivering for its customers and is in sync with our goal to become the leading one stop travel and delivery platform in Asean.”

Stephen Fitzpatrick, CEO of Vertical commented: “We are delighted that AirAsia is the latest leading airline committing to lease our zero-emissions VX4 aircraft. AirAsia provides many fantastic opportunities to travel around some of the most beautiful and diverse countries in the world, and I am thrilled that we will be bringing zero emissions flight to people all across Asia.”

About VX4 eVTOL Aircraft
VX4 eVTOL Aircraft The four passenger, one pilot VX4 is projected to have speeds up to 200mph, a range over100 miles, near silent when in flight, zero operating emissions and low cost per passenger mile. The VX4 is expected to open up advanced air mobility to a whole new range of passengers and transform how we travel. Find out more: vertical-aerospace.com

About Avolon
Headquartered in Ireland, with offices in the United States, Dubai, Singapore, Hong Kong and Shanghai, Avolon provides aircraft leasing and lease management services. Avolon is 70% owned by an indirect subsidiary of Bohai Leasing Co., Ltd., a public company listed on the Shenzhen Stock Exchange (SLE: 000415) and 30% owned by ORIX Aviation Systems, a subsidiary of ORIX Corporation which is listed on the Tokyo and New York Stock Exchanges (TSE: 8591; NYSE: IX). Avolon is the world’s second largest aircraft leasing business with an owned, managed and committed fleet, as of 31 December 2021 of 824 aircraft.

About Vertical Aerospace
Vertical Aerospace is pioneering electric aviation. The company was founded in 2016 by Stephen Fitzpatrick, an established entrepreneur best known as the founder of the Ovo Group, a leading energy and technology group and Europe’s largest independent energy retailer. Over the past five years, Vertical has focused on building the most experienced and senior team in the eVTOL industry, who have over 1,700 combined years of engineering experience, and have certified and supported over 30 different civil and military aircraft and propulsion systems.

Vertical’s top-tier partner ecosystem is expected to de-risk operational execution and its pathway to certification allows for a lean cost structure and enables production at scale. Vertical has a market-leading pre-order book (by value) for a total of up to 1,350 aircraft from American Airlines, Avolon, Bristow and Iberojet, which includes conditional pre-order options from Virgin Atlantic and Marubeni, and in doing so, is creating multiple potential near term and actionable routes to market.

About Capital A
Capital A is an investment holding company with a portfolio of synergistic travel and lifestyle businesses that leverage data and technology to deliver the best value at the lowest cost, supported by high quality data and one of Asia’s leading brands that remains committed to serving the underserved.

UNWTO Members Support Leadership and Back Plan for Tourism’s Future