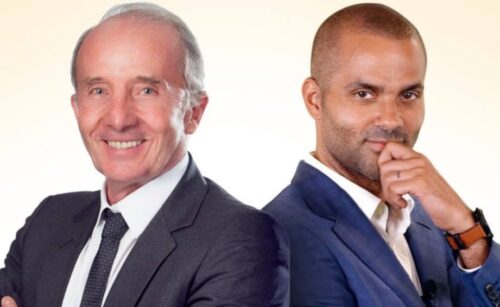 For Parker, Reybier is an inspiration in this new chapter, and the two share similar values of leadership and excellence, letting quality guide the way for any venture. “We both share a passion for wine, but also for sport,” Reybier explains. “I’m from Lyon and particularly admire the dedication Tony shows for the LDLC ASVEL [French basketball team in Lyon], and I am in just as much admiration of how he has been carrying out his career with success.”

As an entry into this entrepreneurial life, Parker will be involved with Reybier’s wineries in Champagne, as well as Château La Mascaronne, an iconic estate in the village of Le Luc in Provence. Here, on the ring-shaped property, olive trees border the château’s ancient stone walls, and, as Reybier says, “there is a particular energy… A special kind of alchemy that puts you at ease.”

Convinced by the winery’s potential, Reybier purchased the estate in 2020. With terroir and conditions ideal for producing an outstanding rosé wine, Château La Mascaronne crafts expressive and balanced wines solely from the estate’s grapes. “Our joint commitment will allow us to go even further in the wineries’ development,” Reybier says. “I am very happy to be able to share this entrepreneurial adventure with fans of our products all over the world.”

Parker is excited to join forces with Reybier, and says: “the plan to move forward on a common project was obvious. I am committed to investing myself alongside him and taking these exceptional wines and Champagnes to the next level. ”

Michel Reybier
Michel Reybier is a French entrepreneur and businessman who is the founder and owner, along with his family, of La Réserve hotels in Paris, Geneva, Zurich and Ramatuelle, as well as Domaines Reybier, which includes wineries such as Cos d’Estournel, Domaine Impérial Tokaj-Hétszölö, Champagne Michel Reybier, Champagne Jeeper, and Château La Mascaronne.

Tony Parker
Tony Parker is a professional basketball player who played for Paris Basket Racing before joining the NBA with the San Antonio Spurs. As their starting point guard, he went on to win four NBA championship titles and become the first French player crowned NBA champion, and the first European player to receive the title of NBA Finals MVP in 2007.