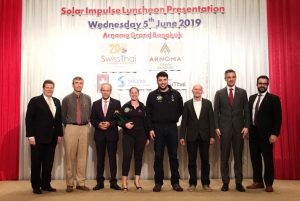 Bangkok (Thailand) – June 18, 2019 (travelindex.com) – The Swiss Thai Chamber of Commerce (STCC) together with support of the Swiss Society Bangkok, Beluthai and Solvay organised a Luncheon presentation by Raphaëlle NICOLET on the historical flight around the world by Solar Impulse at Arnoma Grand Ballroom, Arnoma Grand Bangkok Hotel.

On 9 March 2015, Piccard and Borschberg began to circumnavigate the globe with Solar Impulse 2, departing from Abu Dhabi in the United Arab Emirates.The aircraft was scheduled to return to Abu Dhabi in August 2015 after a multi-stage journey around the world. By June 2015, the plane had traversed Asia, and in July 2015, it completed the longest leg of its journey, from Japan to Hawaii. During that leg, the aircraft’s batteries sustained thermal damage that took months to repair. Solar Impulse 2 resumed the circumnavigation in April 2016, when it flew to California. It continued across the US until it reached New York City in June 2016. Later that month, the aircraft crossed the Atlantic Ocean to Spain. It stopped in Egypt before returning to Abu Dhabi on 26 July 2016, more than 16 months after it had left, completing the approximately 42,000-kilometre (26,000-mile) first circumnavigation of the Earth by a piloted fixed-wing aircraft using only solar power.

About Arnoma Grand Bangkok
Arnoma Grand Bangkok is part of the Arnoma Hotels and Resorts Group and a sister property of the The Felix Kanchanaburi which will eventually be rebranded as Arnoma Resort in Kanchanaburi. With its unrivalled location close to many of Bangkok’s premier office towers, within walking distance of some of Bangkok’s best shopping choices, with 369 Rooms and suites and state of the art meeting facilities suitable for meetings and functions of all types, Arnoma Grand is one of Ratchaprasong’s iconic properties.