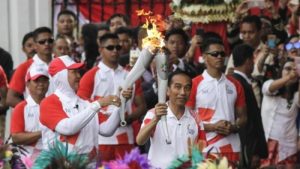 Jakarta (Indonesia) – September 5, 2018 (travelindex.com) – President of IOC, Thomas Bach, welcomes Indonesia to be one of the candidates to host the 2032 Olympics, following the country’s success in organizing the 2018 Asian Games.

During the meeting, Joko Widodo has also stated that the success of the 2018 Asian Games has shown Indonesia’s ability to host a larger multi-sports event.

Around 12,000 athletes from 45 nations as well as thousands of officials and media attended the Asian Games in Jakarta and Palembang. During the event that is held from 18th of August to 2nd of September, Indonesia has provided a spectacular opening ceremony and all competitions have been well organized.

In addition to that, the competition venues are international standard-considered, such as the velodrome which is recognized as one of the best in the world.

Book your hotel in Indonesia, Bali and around the world in 55 countries at best rates available. Pay at the hotel. Book now at HotelWorlds.com!

Tourism and Leisure: Roadmap to Beautiful Life at the Global Tourism Economy Forum