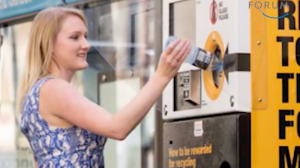 New York (USA) – September 25, 2018 (travelindex.com) – The World Economic Forum is mobilizing a new partnership to avert the growth in global plastic pollution by 2025. The initiative is called the Global Plastic Action Partnership (GPAP) and will collaborate with government and stakeholders in coastal economies who are battling waste. It will translate ambitious commitments into action and show how business, communities and government can redesign the global “take-make-dispose” economy as a circular one.

A circular economy is a regenerative approach to production and consumption, in which products and materials are redesigned, recovered and reused to reduce environmental impacts.

The partnership is funded and supported by the governments of Canada and the United Kingdom as well as several companies, namely The Coca-Cola Company, Dow Chemical and the PepsiCo Foundation.

The first collaboration is with the Government of Indonesia. The world’s largest archipelago is suffering a crisis of plastic waste and the government has a national plan to reduce it by 70% over the next seven years.

Communities, entrepreneurs and government agencies in Indonesia are fighting pollution and showing considerable scope for innovation, but swifter action is needed.

“Indonesia has some of the world’s highest levels of marine biodiversity, which support crucial fisheries, provide food security for millions and drive a vital tourism economy,” said Luhut B. Pandjaitan, Coordinating Minister for Maritime Affairs of Indonesia. “We all need a healthy ocean, which is why we have set ambitious national targets to tackle plastic waste. By mobilizing public, private and community support, and accelerating innovations such as biodegradable materials, we can drive a circular economy to beat plastic pollution.”

Collaborations in two other coastal nations (one in West Africa and a small island developing state) will be announced in coming months.

The partnership aims to have investable solutions in place by 2020, which can then be adapted and implemented in other countries. These three proofs-of-concept will coincide with the UN’s next landmark ocean conference.

The World Economic Forum will host the partnership in collaboration with the World Resources Institute, allowing it to tap into two networks of experts, civil society, government and industry leaders: PACE (a circular economy platform) and The Friends of Ocean Action (a network of ocean leaders dedicated to fast-tracking practical solutions to challenges facing the ocean). The partnership will collaborate with the Pew Charitable Trust on data analysis and modelling at the national level to drive evidence-based action.

The ocean provides more than one-half of the Earth’s oxygen, it stabilizes the climate, and billions of people depend on it for food, employment and their livelihoods. Plastic waste is straining this vital food and planetary lifeline.

GPAP aims to build on the momentum of those businesses, entrepreneurs, governments, non-profit organizations and scientists who are doing critical – and often unheralded – work to beat plastic pollution in our land, soil, rivers and seas. It also follows major commitments by world leaders.

Last year, more than 200 nations pledged to end plastic waste at the United Nations Environment Assembly. In April this year, the UK announced the Commonwealth Clean Oceans Alliance, and Canada has championed the issue this year in its role holding the Presidency of the G7 as well as spearheading the development of the Oceans Plastics Charter.

“We need this leadership to turn into a mass movement of community, industry and public action for securing the healthy future of our oceans upon which we all depend,” said Dominic Waughray, Head of the Centre for Global Public Goods, Member of the Executive Committee, World Economic Forum.

GPAP has initial funding of £2.4 million ($3.2 million) from the UK Government through the Department of Environment Food and Rural Affairs and Department of International Development; and CAD6 million ($4.6 million) from the Government of Canada. The Coca-Cola Company, Dow Chemical and Pepsico Foundation have jointly contributed more than $2.4 million.

Jon Banner, Executive Vice-President, Global Communications and President, PepsiCo Foundation, USA, said: “Building a more sustainable future is one of PepsiCo’s highest priorities, which is why we are working to urgently address the build-up of plastic waste. We’re proud to join this partnership and believe it is the kind of innovative, cross-sector coalition that is essential to developing practical solutions for redesigned waste management systems in coastal communities.”

Jim Fitterling, Chief Executive Officer, The Dow Chemical Company, USA said: “Dow, alongside other leaders in the plastics and chemicals industries, understands the important role materials innovation will play in solving this critical global challenge. Through innovation and collaboration, Dow is committed to improving the recyclability of plastics and will help facilitate the world’s transition to a circular economy, where waste is captured and designed into new products and services.”

Michael Gove, Secretary of State for Environment, Food and Rural Affairs, United Kingdom said: “The scourge of plastic pollution on our environment is a global problem, requiring a global solution. I am proud of the leading role the UK has played in bringing together the Global Plastics Action Partnership, a key step in protecting our precious natural environment. This partnership, which builds on the commitments of the Commonwealth Clean Oceans Alliance, brings countries and businesses together from all over the world to safeguard our land, rivers and seas for future generations.”

Catherine McKenna, Minister of Environment and Climate Change of Canada said: “Plastics play an essential role in our lives, but they also make up the majority of marine litter. Improving how plastics are made, used, collected and recycled will help keep viable plastics in the economy and out of our oceans and waters. Canada is proud to support the Global Plastic Action Partnership, joining efforts with partners from around the world towards this important objective.”

Penny Mordaunt, Secretary of State for International Development, United Kingdom said: “Plastic pollution of the oceans is one of the most pressing environmental challenges of our time and I am proud that the UK is leading the way in tackling it. We are helping the governments of developing countries fulfil their commitment to eliminate avoidable plastic waste and to develop technologies to encourage recycling. I am delighted to be part of today’s launch and to commit UK support to the global push to make a lasting change on this issue.”

James Quincey, President and Chief Executive Officer, The Coca-Cola Company, USA, said: “We are proud to partner with the World Economic Forum on this important initiative. The world has a packaging waste problem, and our World Without Waste vision aims to help solve it. A litter-free world is possible, and we want to help lead the way.”

The World Economic Forum, committed to improving the state of the world, is the International Organization for Public-Private Cooperation.
The Forum engages the foremost political, business and other leaders of society to shape global, regional and industry agendas.

First Blueprint for Data Policy Adopted by City of Helsinki