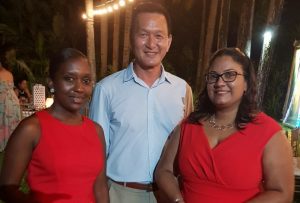 Victoria, Mahe (Seychelles) – March 6, 2019 (travelindex.com) – This week the world of tourism will be travelling to Berlin in Germany for the ITB Tourism Trade Fair. This is one of the biggest tourism trade fairs in the world and countries who want a bigger share of the discerning travellers will all be trying to impressing tour operators and the press as they all showcase their new developments and attractions.

I will also be in Berlin this week for private meetings and for addressing a conference in my capacity as a tourism consultant.

Seychelles has entered a new era with the recent passing of former President Albert Rene this week. His death followed so closely to the passing of founding President, James Mancham.

Both these political personalities shaped, in their own ways, the political landscape of the islands as well as the Seychelles we see today.

President Albert Rene, the Seychelles’ second, and long serving President, passed away in Seychelles Hospital at the age of 83 during in the early hours of the 27th February 2019.

During the Seychelles Independence in 1976, Albert Rene was Prime Minister in the coalition government of President James Mancham. In 1977, he staged a Coup D’Etat and became President. He retained his presidency of the islands until 2004, where he handed power to his Vice President, James Michel.

In the early 1980s, President Rene took over the responsibility of the island’s tourism portfolio in a bid to relaunch the Seychelles tourism industry. He recruited John Enright and Eamonn Keane through the Irish Tourism Board. John Enright became the CEO of the Tourism Board and Eamonn Keane was attached to the Ministry of Finance with the aim of facilitating anything tourism related.

I had already been recruited in the Ministry of Tourism by Minister Mathew Servina, the then Minister of Tourism a couple of years before the arrival of John Enright and Eamonn Keane, and worked closely with the consultants who came up with the new launch strategy for Seychelles, inclusive of the new very successful logo “Unique By A Thousand Miles”. At that time, Seychelles had branded itself as one of the world’s “Best Kept Secrets.” The concern soon surfaced that perhaps our secret was too well kept, prompting the relaunch by John Enright of the Irish Tourism Board, who was called upon to relaunch our ailing tourism industry. Mr. Enright brought in an effective group of consultants and launched the successful “Seychelles, Unique By A Thousand Miles” tag line. I joined John Enright as his Executive Assistant and worked by his side for many years. This was in 1981 after the Seychelles Tourist Board was established, with John Enright as director and when at 27-year-old I became his assistant.

John Enright, with the support of the Head of State, moved to increase the visibility of the islands, accompanied by a large private sector trade delegation, he organised a European promotional tour in 1982. He also used the Seychelles Culture and the island’s Folkloric Troupe in the promotion of the islands.

President Rene survived many attempted Coups and political challenges during his lengthy political career, and has taken to the grave many secrets from his term of office.

I’d like to take this opportunity to offer my condolences to his family, friends and supporters. The political landscape of Seychelles is set to change with the passing of the stalwart of the ruling party, but today we take the time to reflect upon a man who dedicated his life to doing what he believed was right. Whether we agree or not with his methods and views, today we think about those who have lost a loved one. The history books will document the rest.

Jean Weeling, the Chairman of Air Seychelles was happy to introduce the National Airline’s new Seychellois Members of their Management Team during the Tourism Industry’s Social Evening at La Plaine St. Andre.

The Air Seychelles Chairman was standing with two Seychellois recruits:- Sheryl Barra, Head of Corporate Affairs & Cosette Moustache, Head of Legal and Company Secretary as he explained the drive by the Airline to have more and more Seychellois in Senior Positions.

This news remained part of the best kept secrets. Seychellois as a whole wanted to hear how we are faring as a people in the restructuring of our National Airline. I take this opportunity to the two young ladies Sheryl Barra and Cosette Moustache for their appointment and wish them success at Air Seychelles.

Air Seychelles has earlier today confirmed that the airline will operate daily flights between Seychelles and the commercial capital of South Africa’s and the country’s biggest city, Johannesburg as from 03rd of June 2019.

The additional frequency will be operated on Mondays by the airlines two class Airbus A320 aircraft featuring 16 business and 120 economy class seats will boost the available capacity on that route to 1,904 seats per week.

Charles Johnson, Chief Commercial Officer of Air Seychelles said: “Johannesburg is a key market for Air Seychelles and expanding our frequency from six per week to daily services to the provincial capital of Gauteng further shows our commitment to offer our guests greater choice and more flexibility when planning their travel. Besides catering to the strong growing demand, strengthening air access between the two capital cities will in addition support the growth of trade including commerce which is vital for the airline’s cargo business as well as for the development of each countries respective economies and tourism industries. This great news will also be beneficial for guests travelling from Durban, East London, Port Elizabeth including Cape Town, with our codeshare partner South African Airways or from Gaborone, Francistown and Maun with interline partner Air Botswana because as from June they will now have more flexibility and better access to our connections to the Seychelles and beyond.”

The new Monday service starting as from 03rd of June 2019 to Johannesburg is already on sale and travellers are invited to book their tickets via airseychelles.com, visit the airlines’ sales offices located in both Mahe and Praslin or contact the Air Seychelles Call Centre on 439 10 00.

The new schedule for the flights between Seychelles and Johannesburg is effective as from 3 June 2019.

First Qatar Travel Mart to be Held in November 2021