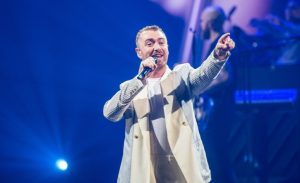 Macau (Macao SAR) – October 24, 2018 (travelindex.com) – Sam Smith performed two powerfully soulful, yet incredibly uplifting concerts in Macau inside the MGM Theater of MGM Cotai on Friday and Saturday nights. His blend of heartbreaking ballads and upbeat songs resonated with concert-goers who enjoyed an up-close and personal experience with Smith inside Asia’s first dynamic theater. His moving performance surpassed all expectations with The Thrill of it All.

Smith sang his hugely popular hits: “I’m Not the Only One”; “Too Good at Goodbyes”; “Lay Me Down”; his Grammy Award-winning song, “Stay With Me”; an acoustic version of “Latch”; the James Bond Spectre theme song “Writing’s on the Wall”; “Restart” and “I Sing Because I’m Happy”. He also performed a number of recent, uplifting songs such as “Omen” and “Promises” which were very well-received.

“We were thrilled to have Sam Smith to choose to perform in our new MGM Theater at MGM Cotai,” Mr. Grant Bowie, Chief Executive Officer & Executive Director of MGM China Holdings Limited said. “He has masterfully delivered two powerful performances that were so emotional and uplifting, he moved everyone in the theater.”

In October 2012, Smith catapulted to fame when he was featured on Disclosure’s single, “Latch”. Two years later, he released his debut studio album, In the Lonely Hour, featuring “Stay with Me” which went on to become an international sensation, reaching number one in the UK and number two on the US Billboard Hot 100. In 2015, Smith garnered many prestigious accolades, winning four Grammy Awards; a Golden Globe Award and an Academy award for the Spectre theme song, “Writing’s on the Wall”; two accolades from the 2015 Brit Awards and three award wins from the 2015 Billboard Music Awards.

MGM Theater is Asia’s first dynamic theater designed by Scéno Plus, a leading performing arts and entertainment design firm. It is immersive, flexible and its agility allows the hosting of concerts, shows, corporate events and more. MGM Theater seats up to 2,000 people in more than 10 spectacular configurations. It is also the world’s first theater to feature a GALA revolving seating system in a 360-degree format surrounding stage. At a flick of a switch, this innovative seating system can be customized for the needs of any event, and within minutes, the theater can be transformed from an intimate dinner setting into a full-blown concert hall.

About MGM Cotai
MGM Cotai is the latest addition to the MGM portfolio in China. Designed as the “jewelry box” of Cotai, it offers approximately 1,400 hotel rooms and suites, meeting space, high end spa, retail offerings and food and beverage outlets as well as the first international Mansion at MGM for the ultimate luxury experience. MGM COTAI also offers Asia’s first dynamic theater and a spectacle to wow every guest who steps foot in the resort. MGM COTAI is being developed to drive greater product diversification and bring more advanced and innovative forms of entertainment to Macau as it grows as a global tourist destination. MGM Cotai is the largest property and the first mega-size complex project in Macau to achieve the China Green Building Design Label Three-Star Certification.

Book your hotel in Macao, Guang Dong Region and around the world in 55 countries at best rates available. Earn HolidayClick Points and pay at the hotel. Book now at HotelWorlds.com!

Centara Family Resort to be Launched Soon in Dubai