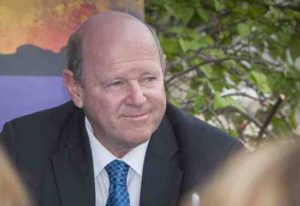 Victoria, Mahé, Seychelles, May 23, 2020 / TRAVELINDEX / Alain St. Ange, broadly seen as Mr. Tourism in the Seychelles, looks back at a long and distinguished career in the industry, culminating over the last 12 years with appointments as Director of Tourism Marketing at the Seychelles Tourism Board, Chief Executive Officer at the Seychelles Tourism Board, Minister of Tourism and Culture and then Minister of Tourism, Civil Aviation, Ports and Marine. St. Ange retired from his government position to run for Secretary General of UNWTO where with a stab in the back action his own government withdrew their support at the eve of the election, bringing his campaign to a sudden end. St. Ange sued the government over this misguided action and won his case, though appealed the level of damages awarded to him.

St. Ange now runs a global tourism consultancy and in that capacity remains a much sought after keynote speaker for global aviation and tourism events and has stated his intent to stand for President when the elections are called later this year.

He is the President of the “One Seychelles” Political Party and preparing for the party to contest the 2020 Presidential Elections and the following National Assembly Elections.

St. Ange shared with ATCNews some of his thoughts about how best a recovery for the archipelago’s tourism industry should be managed, given that prior to #COVID19 tourism was the biggest economic sector of the economy.

The world of tourism is suffering and many tourism destinations are searching for their own marketing juggernauth to guide the situation on hand.

Seychelles remains the idyllic mid-ocean group of islands blessed to be a year round tourism destination and is part of greater Africa and a founding member of the Vanilla Islands organization, which brings together Reunion, Madagascar, Mauritius, Mayotte, the Comoros and of course the Seychelles. Formed in 2012 and seen as a brainchild of St.Ange was he then elected as the First President of that regional organisation and he remains the only one who was elected to serve a second back-to-back mandate.

Tourism Ministers and Governments in many countries see the Seychelles as a destination which in a massive marketing juggernaut over the past decade began to punch way above her prior status. Many of the sitting tourism ministers in Africa and beyond in fact look at the Seychelles for inspiration and guidance, as they are working on their own recovery strategies.

Where did tourism in the islands come from?

The tourism industry of Seychelles then recorded sustained growth up to the global financial crisis in 2008, when a drop in arrivals of nearly a quarter was anticipated before active countermeasures were devised as the archipelago’s private sector took over the lead role at the tourism board. That year ended with the loss of just a few hundred arrivals compared to the previous year, albeit at the expense of tariffs being discounted.

During the period between 2009 and 2019 did the Seychelles set new arrival records year after year, to a large extend triggered by the launch of the Seychelles International Carnival in 2011 which over the following couple of years then brought the global media spotlights on the islands and making it into one of the world’s most desired island tourism destinations.

Keeping close to the tourism industry’s key stakeholders but also the workers in the sector – many of whom have been laid off or sent on leave – gives St. Ange the insight needed to understand their concerns and needs of both staff and owners / operators, many of whom have been left bewildered by initial government announcement of a support package, only to be confused by different statements of line ministries tasked with the implementation.

St. Ange told ATCNews that he has the proven competence to bring tourism out of the doldrums and revive the industry and set it on a recovery course which will return the island’s global status while being recognized as a safe destination.

This applies in particular to the ban on cruise ships until the end of 2021, which many stakeholders involved in this kind of tourism operation have called misguided as far as the length of the ban was concerned.

Human Capital, the Foundation of the Digital World of Tourism