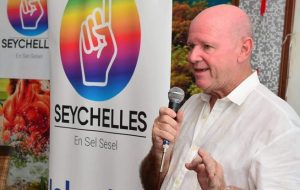 Victoria, Mahe (Seychelles) – April 29, 2019 (travelindex.com) – The launch of the “One Seychelles” Political Party was held on Friday the 26th April and Alain St.Ange, the island’s former Minister for Tourism, Civil Aviation, Ports and Marine was elected to lead the party as they prepare for the coming elections. St.Ange is joined by former Minister Peter Sinon who held the Fisheries portfolio after returning to Seychelles from the African Development Bank.

After the election of Office Bearers of the new political party Alain St.Ange and Peter Sinon, the President and Secretary General of the “One Seychelles” political party took to the podium to address the full house of interested Seychellois present with numbers far surpassing all their expectations.

Peter Sinon, the Secretary General of “One Seychelles” explained the Party’s Manifesto and spoke at length on unity for Seychelles and safeguarding the islands.

When Alain St.Ange, the President off the “One Seychelles” political party took to the podium he started by saying that the 26th April 2019 would remain a historical day in Seychelles Politics with the launch of the “One Seychelles” party. Alain St.Ange went on to welcome the leaders of the “Lalyans Seselwa” Party of Patrick Pillay who were present to show solidarity in the opposition. He also thanked everyone present who had come forward from the red or green political camps.

“Today everyone present we have visited you at home, or we have interacted with you for the creation of a new Seychelles. This move will not please everyone especially those who believe they have a monopoly on ideas and on what is needed for the people of Seychelles. This cannot be an attitude for anyone who believes in democracy and what a democratic society stands for. They should buy a Monopoly Board Game and play it at home someone on Praslin said.

We have named this new political party ‘One Seychelles’ because it is to push the point that we all have only one Seychelles, and the time has come to do away with the ‘with us and not with us’ policy that has been destroying our country. This policy is worst today than ever before and resulting with so many capable Seychellois not being able to do their bit to keep Seychelles on the road of success and in so doing earn a decent living for themselves and their family. With One Seychelles we shall have One People, One Nation and a proud Seychellois Culture. As we move forward and prepare for elections we shall dedicate energy, time and resources to our 5 Point Action Plan to revive Seychelles, and these are:

1. Fight the with us and not with us strategy in the country that has never been as bad as it is today.

2. Narrow the gap in the two groups of The Haves and The Have Not and push for no one to be living below the poverty line. Today anyone earning below R. 7500 per month is deemed, according to official reports, to be living in poverty. This includes our old age pensioners and home carers. Salary Bands of the Government Salary Scale will need to be revised to do away with the two or three lower bands to ensure a more acceptable salary is earned by those in the lower cadres. To achieve this the frills offered to the Executive and his Government and to the Members of the Legislative. Frills such as end of year bonus and end of term gratuity will need to be discontinued as these payments also help increase the gap difference between the haves and the have not.

5. Respect Seychellois and its Civil Service and push for a culture where the country Seychelles is respected. This will put an end to separation of our islands for the benefit of foreign military powers.

These five point plan will help revive our economy, it will help create jobs for our people and it will enable our people to meet their basic needs. It is jobs that will transform the lives of our people from that of existing difficulties and from that of want for a better life. Jobs will provide for greater comfort and wellbeing. This is the future we see after having discussed it with you all” said Alain St.Ange as he delivered his first address as Leader of the One Seychelles party before ending with saying “A good staff will always have their employment contract renewed.

The People of Seychelles are the ones who are the employers of both the Executive and Legislative Branches of Government, and if Members of these two Branches of Government have done a good job and delivered on the aspirations and expectations of the people who elected them to office, they can be assured off the renewal of their contract, but if they were disappointment to their employers they will be swept away and new employees put in their places”.

Air France Prepares for Arrival of New Airbus A220

IT&CMA and CTW Asia-Pacific Move to 2021