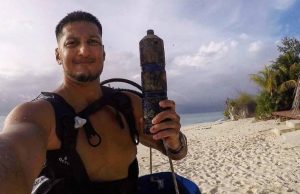 Victoria, Mahé (Seychelles) – February 24, 2020 (travelindex.com) – Seychelles marine scientist, Ameer Ebrahim, recently published his research in the Journal of Fish Biology, a prestigious global research database. This publication follows four years in the field, where Ebrahim targeted herbivorous fish species, such as parrot-fish and rabbit-fish, and examined what role these species may have on coral reef resilience.

His research considered specifically the movement patterns of the shoemaker spine-foot (Siganus sutor), known locally as ‘kordoyen blan’. This species is of vital commercial importance throughout the Western Indian Ocean region. In Seychelles they comprise of the bulk of the annual artisanal catch, and is steadily becoming over fished.

The data revealed integral links between networked habitats, which should assist the relevant authorities in their efforts to effectively manage marine protected areas. Ebrahim expressed his desire that Government considers incorporating sea-grass meadows, which are currently overlooked, into management discussions.

He has another paper that is currently under international review, and hopefully will be published within the next few months. He is adding to the modest body of research available on our marine environment.

Ebrahim has expressed his gratitude to Denis Private Island for their hospitality and support, and to the Seychelles Fishing Authority (SFA) for facilitating his research.

It is hoped that the SFA, which has decades worth of unpublished accumulated data from countless sponsored research initiatives, will soon begin to publish and share their findings with the public as well.

The Ritz-Carlton in Amman Appoints Tareq Derbas as General Manager